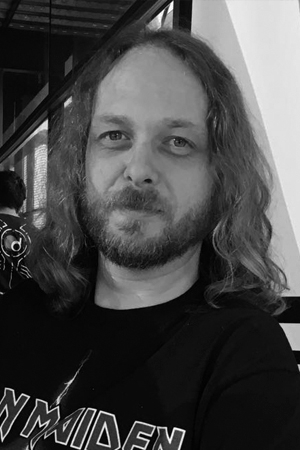 I’m James Farrell, my nickname Fazz comes from school where Fazz was short for Farrell and it whilst at school at around age 8 or 9 that I discovered and began to teach myself calligraphy. I studied Mechanical Engineering and passed with distinction in 2002.
After working in various fields I found the pointed pen around 10 years ago and began putting all of my learned skills in Engineering, love of music and physics and science in general into coming up with new and contemporary forms of pointed pen.
I produce works of art around the subjects that interest me the most, largely being science, the natural world, music and so on, all of my works are for sale in their original form. I do accept commissions.
Some of my works, followed by interviews, have been published in important magazine of calligraphy and typography design, such as: “ Bound and Lettered”, Editor John Neal Bookseller, “Scripsit, The Washington Calligraphers Guild Journal”, Editor Michael Clark, “Scripta” The Magazine of Philadelphia Calligraper’s Society, “Artist’s Blok Magazine Special Edition” Issue about Typography, Letters and Penmanship.
My work has been displays in some Museums, such as: Museo de Arte Carrillo Gil, in Mexico City and in the “International Exhibition Kaligrafist” at the Design Centre of Istanbul, 2017.