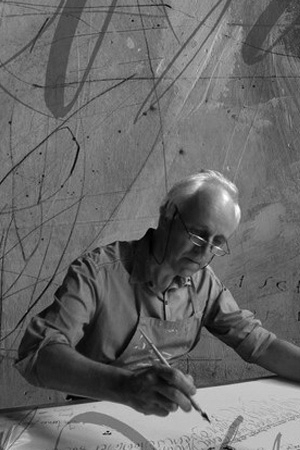 He was born in Belgium in 1959. He studied classical languages at the University of Leuven and upon graduating he settled in Bruges, where he taught Latin and Greek to high school students for almost 25 years. In 1991 he signed up for a beginner’s course in calligrapher Brody Neuenschwander.

A series of workshops in the US and his participation in an international symposium at Bruges launched him onto the international scene. In the following years, he accepted invitations from places in Europe, Australia, Japan, Canada, South-Africa, Turkey and the United States to conduct workshops, coach students and give presentations.

As a full-time freelance calligrapher, he now takes on various commissions from both the public and private sector. In addition, he remains locally and internationally active as a teacher of contemporary calligraphy.

Every now and then he completes a major Project such as his solo exhibition Yves Leterme cleans up in Antwerp (2011). a collaboration with harpist Andrea Voets (Latin Lovers), his book, Thoughtful gestures (2011), the Beethoven exhibit (2012) and collection, Litterae (2014).

As a result of his workshops, publications and exhibitions, his artwork and lettering style have influenced a large number of contemporary calligraphers. Samples of his work can be found in public and private collections worldwide, and perhaps more conveniently, also at www.yleterme.be.